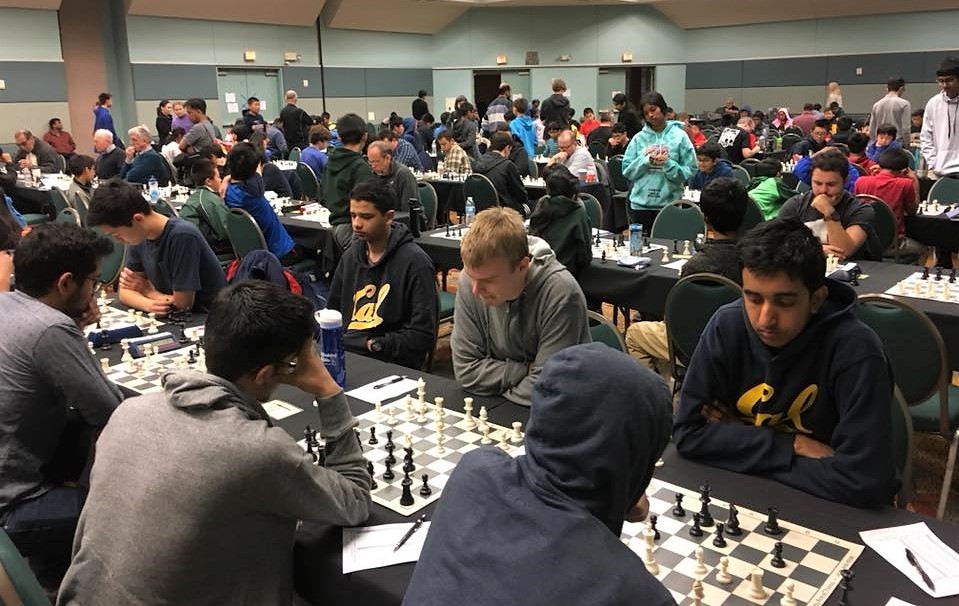 BayAreaChess hosted another memorable US Amateur Team West Championships at the Santa Clara Convention Center this past President’s Day weekend.

USATW attendance continued to climb this year, its 3rd straight year in Northern California under BayAreaChess (total of 6 including 2012-2014), showing the interest in team-based competition ala the ever-popular Olympiads and the emerging PRO Chess League. 440 players on 107 teams competed in the main and scholastic sections. That’s up 7% from the prior year, and up a massive 42% from 2016. Growth was especially strong in the scholastic section, which drew 164 kids on 41 teams this year, nearly double the attendance in 2016.

276 players on sixty-six teams participated in the main event, with five teams boasting average ratings over 2190. Whether they stacked their top three boards or had more balanced lineups, teams put together all sorts of creative ways to stay under the 2200 average rating limit.

The field was headlined by GM Priyadarshan Kannappan, who traveled from 2017 Pan Am Intercollegiate team winner, Webster University, veteran GM and BayAreaChess coach, Enrico Sevillano, and a host of IMs, including co-author Vignesh, who came back from a six month break from chess to participate! 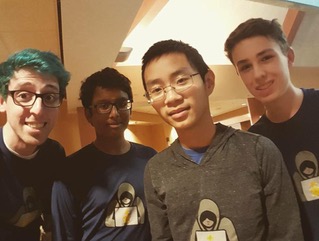 The top-seeded team from the host, BayAreaChess, was (above) composed of players from the San Jose Hackers, the team it sponsors in the PRO Chess League. Check out the Hackers on prochess! Another contender was UC Berkeley, which sent two teams. Its top team was composed of IM Kesav Viswanadha, Finnish Champion FM Teemu Virtanen, NM Arjun Bharat and Nathan Fong.

The team atmosphere of the Amateur Team West was a great opportunity for chess players of all ages to compete, but also to enjoy the camaraderie present.

Contributing to the fun throughout the weekend were the team names. The Fire Breathing Rubber Duckies and Harvey Weinstein's Touch Move tied for third place in the best name competition, while No Pawn Intended took second. For obvious reasons, the clear winner was “Free Brownies for Everyone if We Win Best Team Name.” The team lived up to their promise and provided brownies to players before and during the last round, attracting some of the younger players more than even their riveting games.

The tournament proved ripe for upsets. After a relatively calm first two rounds, the top four teams were all upset right before the merger of the 3-day and accelerated 2-day groups. More upsets followed, and only four teams were left with perfect scores heading into the final day. After defeating their respective opponents, the Fire Breathing Rubber Duckies, with 2 NMs, and the NorCal House of Chess Warriors, with 2 IMs and a FM, were the only teams still standing with perfect scores before the final round.

With a return flight back to Southern California, the Rubber Duckies took a pre-scheduled last round bye, leaving the Warriors with a chance to win clear first. They were paired up against Vignesh’s team, Piece of Mind, and after an unfortunate blunder by this co-author (Hey! Six months off doesn’t help calculation), NorCal was able to draw the match. Due to their bye, the Duckies’ tiebreaks were significantly worse, letting NorCal win the event. The San Jose Hackers, led by IM Kostya Kavuitsky, finished third on tiebreaks with 5 points, beating out Sevillano’s “We Checked with Queen ... We Will Rook You!” 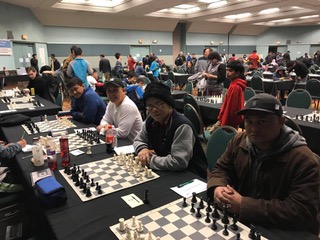 With 5.5 points, GM Kannappan also won the top board 1 prize. NM and BayAreaChess coach Derek O’Connor and NM Ivan Ke tied for top second board performance with 5.5, but NM O’Connor won on tiebreaks. On board 3, Pranav Senthilkumar beat out FM Balaji Daggupati on tiebreaks. There was a three-way tie between Tim Deng, Jeffrey Wei, and Tiger Che for the top board 4 prize, and Deng came out ahead on tiebreaks. Christian Jensen won top reserve prize, winning all four of the games that he played. 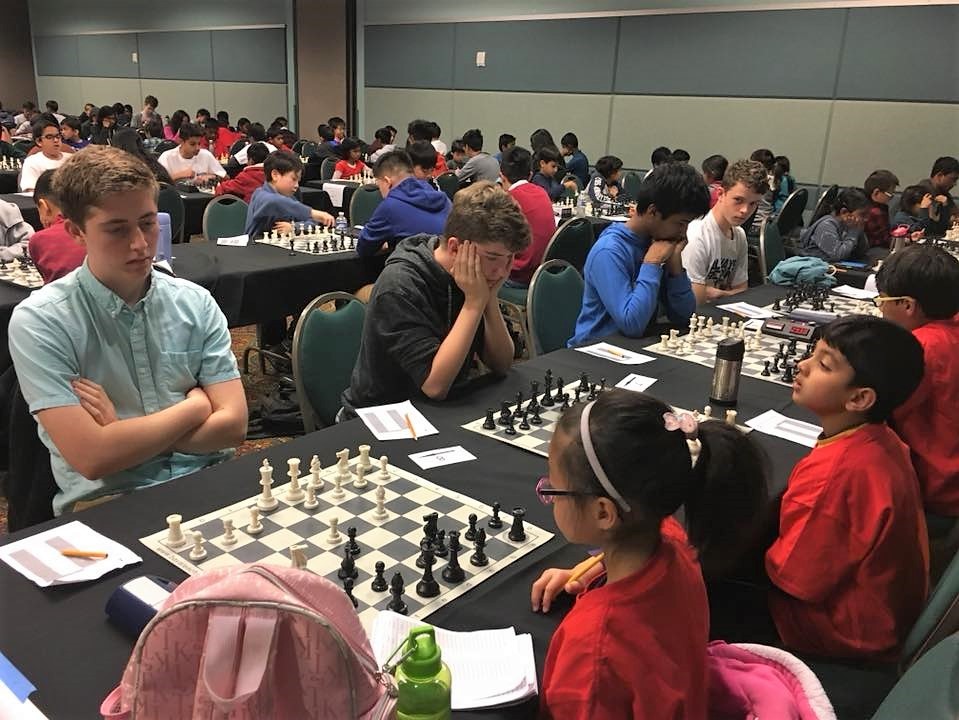 The one-day scholastic section, which limited teams to under 1200 average rating, featured several clubs and schools that brought massive contingents. NorCal House of Chess and Evergreen Chess Club each brought 5 teams, while co-author Lai’s Fallon Middle School entered 8 teams. As a result, there was less creativity in the team names, and fewer surprises in the final standings. NorCal’s Warriors tied for first with Cardinal Knights (a pseudonymous Lowell High School of San Francisco) and last year’s scholastic co-champion, the Fallon Mustangs.

With the only 4-0 records going into the final round, NorCal and Cardinal drew a tense championship match, allowing NorCal to get the nod again on tiebreaks, over Cardinal. That allowed the Mustangs with 3.5 to defeat another Fallon team with 3.5, the Ponies, and leap to the top, taking 3rd on tiebreak. 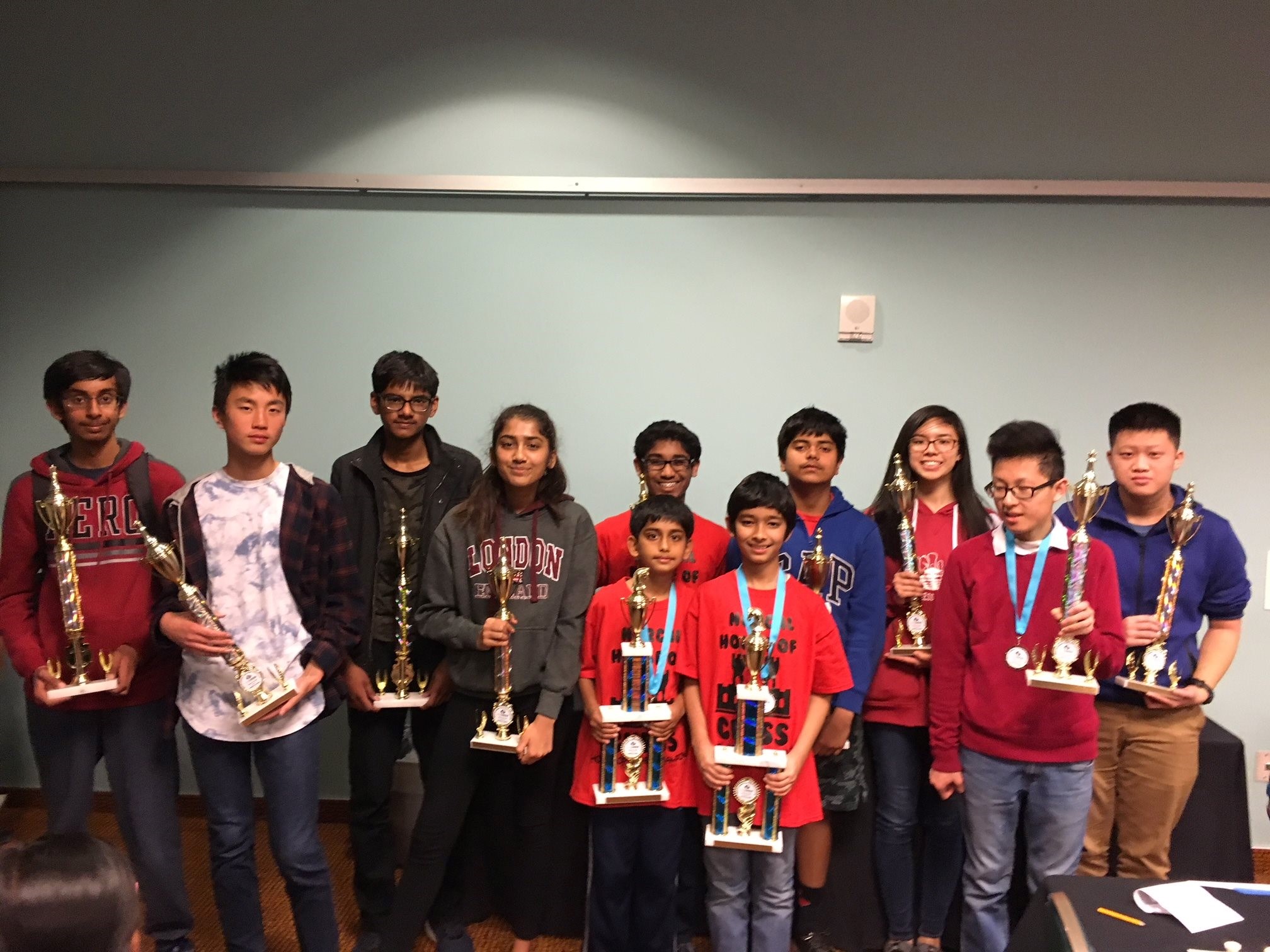 See the 3 teams above, with (from left): Fallon, Norcal, and Cardinal. More photos of the action and winners here.

In 4th place with 4 team points were, in order, The Best team, the Fallon Unicorns and the NorCal House of Chess’s Might Knights. The Unicorns took home the Top u900-rated team trophy while The Best Team won Top Club team. Rounding out the team trophy winners were the Fallon Ponies for Top School team, the All-Girls team for, naturally, the Top Girls team, Dublin Chess Club for Top u600 team, and Evergreen Chess Club Team 4 for Top u300 team.

Individually, Katherine Pask of Fallon and Edward Han of Evergreen both scored a perfect 5-0 on first board, with Katherine taking first on tiebreak. On 2nd board, Winston Leung of the Dublin Black Knights took first on tiebreak with 4.5 over Tyler Ung (NorCal) and Prescott Yu (Cardinal). On 3rd board, Arvind Ignatius (NorCal) won first on tiebreak with 5-0 over Jack Longaker of Sacramento’s SSCL All-Stars, while on 4th board, there were four 5-0 scorers, in tiebreak order: Tristan Liu (The Best), Yasmin Suzani (One Lady and Three Knights), Sumedha Chikkerur (Queen) and Zihan Guo (MUSTANG (not Fallon)).

For the many players that obviously enjoyed the team format, there are two tournaments to which they can look forward! For K-12 players, the CalChess Scholastic Team vs. Team Championship is coming in just a month on March 24-25. This inaugural state championship follows successful predecessors last year, including a November team tournament that drew 110 players and was won by Harker School (K-6 section) and Monta Vista High School (Grades 7-12 section). Details here.

The Team vs. Team Championship will be great practice for junior players preparing for the CalChess Scholastic State Championship April 7-8, which is expected to draw up to 1,200 players of all levels, from nationally-ranked players competing in the FIDE-rated championship sections, to new tournament players in the rookie sections. Come and be a part of this historic event!

Also later this year will be the debut of another official state championship - the CalChess Team vs. Team Championship. More information on the tournament, open to adults and juniors, will be coming soon.

BayAreaChess Executive Director Dr. Judit Sztaray would like to thank all of the players for competing in another successful US Amateur Team West Championship organized by BAC. She would also like to thank Chief TDs Thomas Langland, John McCumiskey and Jordan Langland, co-organizer Abel Talamantez, and all the staff and volunteers who made this event run smoothly and ensured fair play. Thanks also goes to the coaches and parents for their continued support: with your help and dedication, BayAreaChess is privileged to be able to bid for this event every year, and be able to host this tournament in the SF Bay Area. As always, BayAreaChess is always looking for ways to improve, so any feedback and suggestion is more than appreciated. Or just simply come join our team in planning for this event!